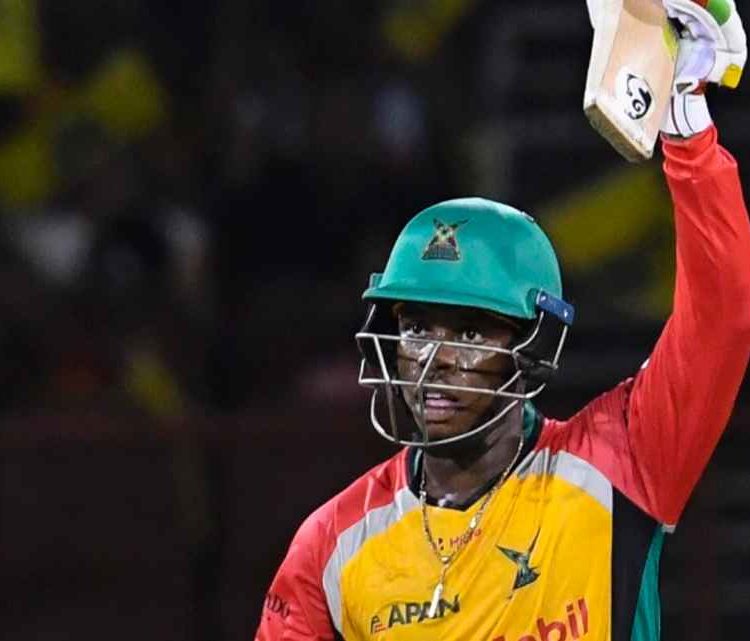 Chris Gayle made 86 as well, after being sent in to bat, and it seemed a match-winning hand on a sticky Providence surface. After all, the next best score of the innings was a mere 15.

St Kitts even had the hosts at 24 for 3 in a chase of 147, but the ploy to use Tom Cooper’s part-time offspin went awry as the first three balls of the fourth over were creamed for a four and two sixes by Hetmyer. This swung momentum in Guyana’s favour, and there was no looking back after that, with victory eventually achieved in 16.3 overs.

Each team’s leading scorer on the night profited heavily from major let-offs early in their innings. For St Kitts, the Universe Boss was stone dead on 5 after missing a sweep in the second over against Chris Green’s offspin. But umpire Nigel Duguid ignored the appeal and Gayle made the most of the reprieve. The St Kitts captain grafted his way through the first half of the innings, scoring at less than a run a ball, before spanking Green over long-on, twice, to end the 10th over.

Gayle brought up a 41-ball half-century in the 13th and then accelerated sharply until he fell thanks to a sensational effort from Sherfane Rutherford. The 19-year old sprinted in from the cover boundary before diving forward to complete the catch and end Gayle’s stay 14 short of a century.

Rutherford’s catch to dismiss Gayle made amends for shelling a skier from Cooper at the square leg boundary in the 11th over. And he continued the good work with another spectacular catch, running in from the boundary and leaping forwards at the ball, to dismiss Anton Devcich. Keemo Paul’s figures after claiming Devicich’s wicket were almost as brilliant as Rutherford’s pair of catches. The fast bowler finished with 2 for 16 in his four overs to keep St Kitts to 146 for 5.

Gayle tossed the new ball to fast bowler Sheldon Cottrell and Nepal legspinner Sandeep Lamichhane and the result was three wickets in three overs. Cottrell carried over his brilliant form from the Global T20 Canada, where he was the tournament’s leading wicket-taker for the champions Vancouver Knights, knocking out Luke Ronchi for a duck in the first over.

Lamichhane’s first delivery in the CPL was far from the best ball he’s ever bowled, but Chadwick Walton drove the leg-stump half-volley straight to Ben Cutting at mid-on to make the leave 9 for 2. Shoaib Malik counterattacked with three boundaries off Cottrell before the left-arm pacer had reason to break out his salute celebration again as the Pakistan batsman was caught behind for 14. Guyana were 24 for 3 after three overs

It could easily have been 24 for 4, considering Lamichanne’s first over had produced a second chance. Hetmyer, facing his first ball, was deceived by a googly and was stranded outside his crease but wicketkeeper Devon Thomas barely even laid a glove on the ball.

Rather than stick with Lamichhane and continue attacking, Gayle tossed the ball to Cooper for the fourth over. Out came a half-tracker. Hetmyer swatted it for four. Then came two full tosses, which were clubbed for six. It was the start of a nine-ball sequence that shifted the momentum in favour of Guyana as they zoomed from 24 for 3 to 61 for 3.

Alzarri Joseph began the fifth over with a no-ball, which Hetmyer clattered through point for four. The free hit was sent over midwicket for six. The next ball was a wayward bouncer and it was ruled as a wide, meaning Joseph had conceded 12 runs off only one legal delivery.

Hetmyer scored 36 runs off the 10 balls that followed Thomas’ fluffed stumping, bringing the required run-rate under a-run-a-ball even as the Powerplay was in progress.

Despite three more terrific overs from Lamichhane, who ended the day with figures of 2 for 12, Hetmyer faced little pressure. He coasted to his fifty off 29 balls before meting out punishment to Ben Cutting as well, striking the fast bowler for two fours and a six in the 16th over. Hetmyer then drove his 2016 Under-19 World Cup team-mate Joseph down the ground for his ninth boundary of the night to put the seal on an emphatic victory.