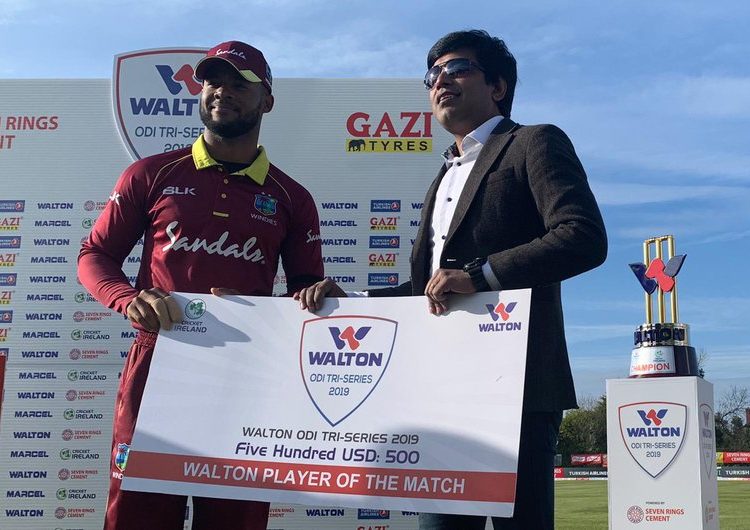 DUBLIN, Ireland – Shai Hope continued his rich vein of form to lead the West Indies batting with his second straight hundred in the Tri-Nations One-day International Series against Bangladesh on Tuesday.

It was the fifth hundred for Hope since last October (only India’s batting machine Virat Kohli has more), but the WINDIES failed to overcome destructive death bowling and strong top-order batting from the Bangladeshis and stumbled to an eight-wicket defeat in the second match of the series.

Hope followed up his career-best 170 last Sunday with an equally efficient 109 – his sixth ODI hundred – to earn the Player-of-the-Match award and shared two significant stands with Sunil Ambris and Roston Chase before the WINDIES collapsed from 197 for two in the closing stages of their innings to undermine their push for a sizable total.

Hope struck 11 fours and one six from 132 balls, Chase collected his maiden ODI half-century of 51 and Ambris made 38, but the Caribbean side had to settle for 261 for nine from their allocation of 50 overs, after they chose to bat.

The West Indies attack then found the hard, true Clontarf pitch and the Bangladesh top-order batting unyielding, as half-centuries from the left-handed triumvirate of Tamim Iqbal, Soumya Sarkar and Shakib-Al-Hasan ensured victory for the Tigers, playing their first game of the Series which also involves hosts Ireland.

Hope and Ambris gave West Indies a solid start of 89 for the first wicket.

The wickets of Ambris, caught at cover to off-spinner Mehidy Hasan Miraz, and Darren Bravo, caught behind off Shakib’s left-arm spin for one seven balls later, left the WINDIES 90 for two in the 18th over.

Chase came to the crease and put on 115 for the third wicket with Hope that gave the WINDIES a good platform to launch an onslaught in the final 10 overs.

But Chase miscued a hook at a short, rising ball from Bangladesh captain Mashrafe Mortaza and was caught at fine leg in the 41st over to trigger a collapse that saw seven wickets fall for 55 in 55 balls

No one else could pass 20 for West Indies, as Mortaza grabbed 3-49 from his allotted 10 overs, new-ball partner Mohammed Saifuddin and left-arm pacer Mustafizur Rahman snared two wickets apiece.

Needing wickets to jolt their opponents, the WINDIES attack failed to make inroads into the Bangladeshi batting, as Tamim and Soumya shared 144 for the first wicket to put them on track for victory.

Roston Chase removed Soumya for 73 to a juggled catch on the mid-wicket boundary by Darren Bravo and Shannon Gabriel had Tamim caught low down at mid-wicket by Jason Holder for the top score of 80 following his stand of 52 for the second wicket with Shakib.

There was no further success for the West Indies, as Shakib hit a run-a-ball, unbeaten 61 and Mushfiqur Rahim a slightly quicker 32 not out to carry the Asian side over the finish line with five overs remaining.

West Indies next face Ireland on Saturday at Malahide, where Bangladesh play the hosts Ireland on Thursday.

The match also marked the ODI debut for Test wicketkeeper/batsman Shane Dowrich, who replaced injured opener John Campbell, one of the heroes of the WINDIES’ opening win in the Series.

Campbell was sidelined with a back injury.