MANCHESTER, England – Members of the West Indies team took a break from their hectic schedule to pay a visit to one of sport’s most iconic venues. Several players, member of the support staff along with family and friends were hosted to a VIP tour of Old Trafford football stadium – the home of Manchester United. West Indies are in Manchester for 11 days as the played ICC Cricket World Cup matches against New Zealand – last Saturday, and India – on Thursday. 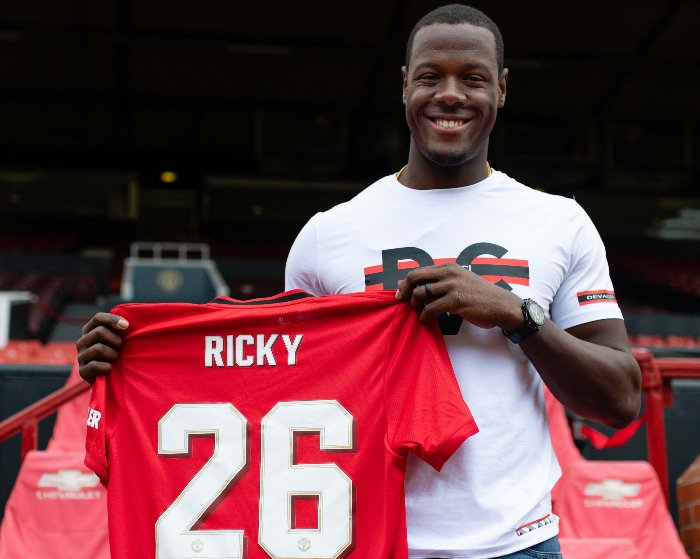 They made the short journey over from the historic cricket venue to the Theatre of Dreams, and saw close up the majesty of the sporting arena. The tour included a trip into the players dressing room – which has hosted many legends of English and international football. They also heard about the history of the club, the legacy of the great manager Sir Alex Ferguson and received replica playing jerseys.

Allrounder Carlos Brathwaite who is a Man U supporter said:

“I’ve watched from afar, but I haven’t been in the stadium from a fan’s point of view. Walking through the directors’ box and walking through some of the hallways, it gives you a sense of folklore and you know something special has happened, and will continue to happen, in these hallowed halls.”

“Everything has a bit of prestige about it. Obviously you expect to see some prestige with Manchester United, but to then experience it is a different level. It’s mind-blowing. To sit on some of the seats that some of the great players you’ve watched have sat in is amazing, and I guess a few of Sir Alex’s famous hairdryer treatments would have been in this dressing room as well. So, just to be in and among history and prestige has made my day.”

Another interested visitor on the tour was West Indies assistant coach Roddy Estwick, who spent time in England during his playing days. Cricket was evidently not the only sport on his mind in that time, and Estwick revealed he used to regularly make the trip over to Old Trafford.

“I’ve been to the stadium lots of times, as far back as 1986 when people like Mike Duxbury and Viv Anderson were playing, and Gary Bailey was in goal. To come and see something like this today is a real pleasure and I’ve really enjoyed it. To sit in the dressing rooms were people like Roy Keane have sat is something that dreams are made of, so I’m really thankfully for the opportunity to be here.”

Supporting the Reds over all those years, Estwick has seen plenty of high points and he admitted that our former Irish skipper is responsible for his all-time favourite United memory.

“It has to the game against Juventus when were 2-0 down in the 1999 Champions League semi-final second leg. Keane rolled his sleeves up, we won 3-2 and we went through to the final. Unfortunately, he had to miss the final but for me that was one of the greatest sporting performances I’ve ever seen. Keane is my all-time favourite United player. And then Dwight Yorke, being a West Indian as well. That treble-winning side of ’99 was outstanding with him and Andy Cole.”

“In the team we have a lot of football fans – actually I believe everyone has ‘a team’. Quite a few are Man U supporters and it was great to make contact with the club. We have done such tours before, with Sheffield United – when we won the Test match at Headingley in 2017, and England at Wembley. This was taking it one step further, a golden opportunity to see what’s a like to be an ‘insider’ at Manchester United for a day. In the Caribbean, Dwight Yorke is a sporting hero, so it was great to see what his life was like wearing the red jersey of Manchester and how he fulfilled his sporting dreams.”