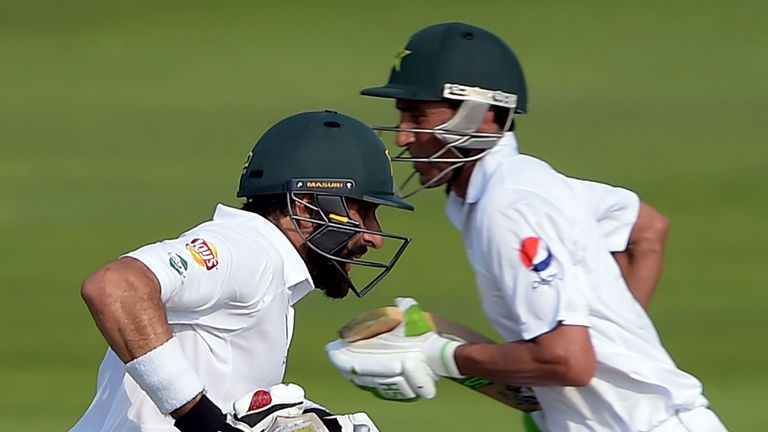 West Indies will be looking to spoil the international farewells of Pakistan captain Misbah-ul-Haq and Younus Khan in Wednesday’s decisive third and final Test at Windsor Park.

Buoyed by a series-levelling win five days ago the hosts are in pursuit of a first Test series success in five years against a team ranked higher.

But despite being routed for 81 on the final day of the second Test in Barbados, Pakistan are still in with a chance of pulling off their first-ever Test series triumph in the Caribbean.

“It’s a special game for us because we have a chance to make history,” said Misbah, focusing instead on the importance of the result for the team.

Still, the fact that both himself and Younus will be retiring from international cricket after the match is a reality that could not be avoided.

“It gives us additional motivation and I hope it’s the same for the team as well,” he explained.

“Sometimes the emotion will come in when you have an occasion like this but it’s important for us to just focus on our jobs and score runs for the team.”

After scoring 58 to become the first Pakistani to go past 10,000 Test runs in the first innings of the series in Jamaica, Younus has tallied just 11 runs in the next three innings.

In contrast, Misbah was unbeaten on 99 in setting up the first Test win before falling for 99 in the first innings of the second Test, a disappointment he was quick to put in perspective.

“Ninety-nine is far better than zero, which is what I got in the second innings,” he noted. “If we perform up to our potential we can beat any side. We have to get our disciplines right and be at the top of our game.”

Following severe criticism from both camps over the surface at Kensington Oval, there was general acceptance that the pitch for the series finale appeared much better on the eve of the match despite again being virtually devoid of grass.

“It doesn’t look too bad,” was West Indies captain Jason Holder’s guarded verdict. “It might be on the slow side to start but hopefully it quickens up as the game goes on.”

With Shannon Gabriel leading the fast bowlers’ demolition of the opposition for just 81 to earn a 106-run win less than a week earlier, no changes are anticipated to the hosts’ bowling attack.

However the top-order batting remains a concern even if the selectors opt not to tinker with a winning line-up.
Pakistan had already decided on their final eleven 24 hours before the start but Misbah chose not to reveal it.

After enjoying tremendous success in the limited-over matches earlier in the tour, leg-spinner Shadab Khan struggled on Test debut in Barbados with match figures of one for 145.

He is expected to make way for fast-medium bowler Hasan Ali in support of fellow pacers Mohammad Amir and Mohammad Abbas.

Pakistan’s greatest bowling threat remains Yasir Shah though, the leg-spinner’s match haul of nine for 177 in the losing effort in the second Test giving him 17 so far in the series.

Prolonged showers two days before the match disrupted preparations and despite a scorching eve of the fixture, a forecast for more rain raises the prospect of the elements playing a significant role in the final result.