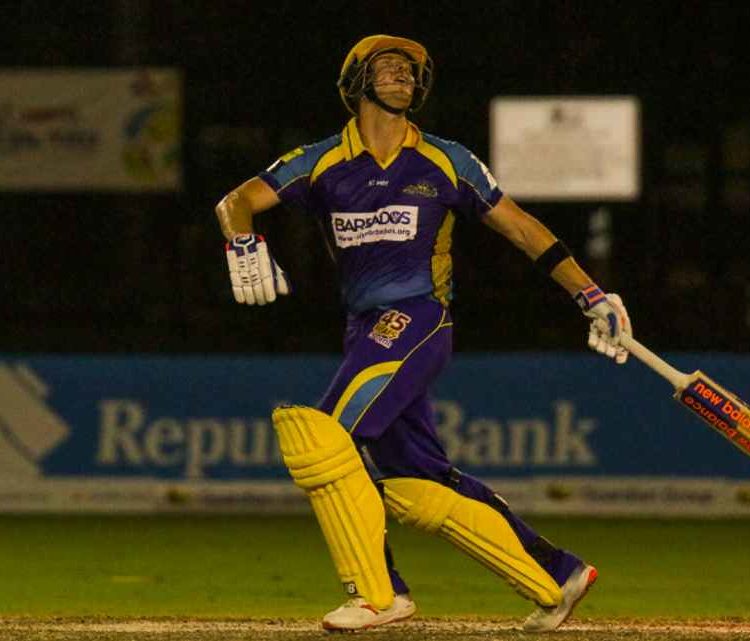 Jamaica Tallawahs can’t wait to get on the first plane out of Fort Lauderdale after their disastrous three-game ‘home’ stretch in Florida ended with yet another defeat. Steven Smith was the architect of their woes, striking a half-century to lead Barbados Tridents to a total of 156 and following it up with a match-winning spell of 2 for 19 in three overs.

Tallawahs appeared well on course at 80 for 0 in nine overs, but Smith pierced the opening stand, removing both Johnson Charles and Glenn Phillips in the space of five balls. The former Australia captain has now modelled his bowling action on Shahid Afridi, and early indications are that it’s totally working.

Though they lost only three wickets in the whole innings, Tallawahs couldn’t score quickly enough in the final few overs, with Andre Russell never making it to the batting crease. All that meant Tridents felt immense relief. They had dropped five catches in the innings but somehow pulled off a coup to move up to fourth place on the CPL table.

From Boca with love

Smith got warm receptions in King City while suiting up for the Toronto Nationals at the Global T20 Canada. The reaction wasn’t too much different south of the border in the USA on Wednesday night in Lauderhill.

Of the 13 CPL matches held in Lauderhill since 2016, the Tallawahs v Tridents showdown was by far the least attended with only about 700 fans at the ground. Among them were five Australians who moved from Sydney to Boca Raton last year and drove 20 miles south to Lauderhill carrying a sign with painted on message, “Go Steve Smith Aussie Aussie Aussie!”

Tim and Jane Anderson came with their three young kids – Bella, 9; Will, 7; and Maddie, 5. When Will was asked who his favorite player was he didn’t hesitate to shout, “Steve Smith!” then yelled “David Warner!” was his number two, showing Sandpaper-gate hasn’t scandalised every young cricket fan.

The Anderson family’s drive was made all the more worthwhile as Smith looked in vintage form while making 63 off 44 balls, his best score since Sandpaper gate. He clubbed five fours and three sixes in his knock, with the pick of the lot a wristy scoop over point for six off Russell’s bowling in the 18th over.

Smith lost his wicket in equally eye-catching fashion, his backswing knocking the bails off to be hit-wicket while his shot found its way into the hands of Rovman Powell at long-on.

Tridents fielding was abysmal with Ashley Nurse and Raymon Reifer dropping two catches each. Nurse was his own worst enemy in the sixth over after he couldn’t hang onto a firm drive from Charles, who was on 28 at the time and eventually went on to make 42. Worse was to come in the 12th and 13th overs when Reifer and Nurse dropped three chances in the space of eight balls.

Smith had just taken two wickets in his previous over – Charles caught by Martin Guptill at deep midwicket and Phillips on a dubious caught behind decision for 36 – when Kennar Lewis, on 2 off 7 balls at the time, skied a slog between Guptill and Reifer at long-on. Guptill was approaching in position to take the catch but was waved off by Reifer, who then got his hands into an awkward position and parried the ball over the rope.

Early in the next over, Lewis was on 9 when he sliced a delivery from Mohammad Irfan towards the third man boundary but Reifer was slow to react, his last-ditch dive not enough to convert the chance. Lewis took two runs off the drop, then skied a drive off the next delivery toward Nurse at long-on, who fumbled it so badly it went for six. Fourteen runs came off those three balls, but Lewis’ luck ran out soon after with Irfan having him caught behind.

Tallawahs had plenty of wickets in hand, but were not exactly coasting to victory as 29 from 18 become 20 from 12 with Taylor and Miller at the crease. Tridents had a golden chance to break the stand in the 19th over when Miller, on 20, top-edged a pull off Wahab Riaz to Shai Hope running in from deep midwicket. Hope was there in plenty of time, but shelled a simple chance.

Nine runs were needed off the final over and Reifer was given the ball rather than captain Jason Holder keeping it for himself. The decision was justified as the left-arm quick kept nailing his yorkers and denying the Tallawahs. Russell, their leader and one of the best finishers in T20 cricket, could only watch from beyond the boundary.