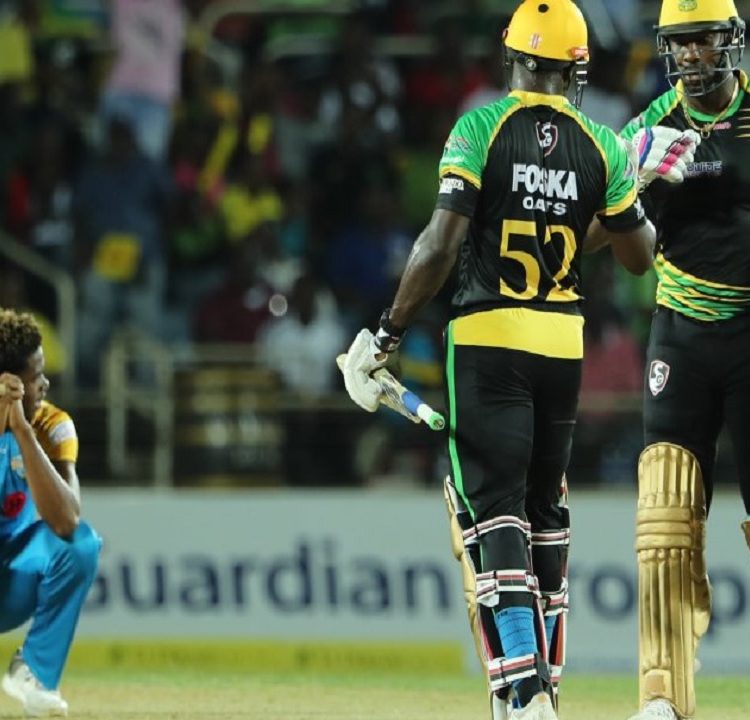 Jamaica Tallawahs scored a six-wicket victory over St Lucia Stars with two balls to spare in the seventh match of the 2018 Caribbean Premier League (CPL) at Sabina Park in Kingston on Tuesday night.

Set 176 to win, the Tallawahs, which needed eight off the last over, reached the target after Ross Taylor hit captain Kieron Pollard for a six over square-leg to bring the scores level with three balls remaining and then scrambled a single to pull off the win.

Rovman Powell engineered the victory with 43 not out from 23 balls after Glenn Phillips (58 from 40 balls) and Johnston Charles (31 from 20) had set a strong foundation with an opening stand of 81 inside eight overs.

With the victory, Tallawahs moved atop the standings over Guyana Amazon Warriors on net run rate with maximum four points from two games. Guyana Amazon Warriors also have four points but played a game more. The victory came three days after Andre Russell enjoyed a sensational first outing as Jamaica Tallawahs captain  in Port-of-Spain as he claimed a hat-trick and a record 40-ball hundred to lead his franchise to the unlikeliest of victories over reigning champions Trinbago Knight Riders.

St Lucia Stars are without a point from three games in the six-team competition this season and the defeat stretched the visitors losing streak to 14.

Although victory was achieved in the final over, St Lucia Stars failed to slow down the Tallawahs and although Pollard and Kesrick Williams pulled off two brilliant catches those moments failed inspire a victory.

Williams held on to a low catch at third man to dismiss Glenn Phillips  to give Obed McCoy a breakthrough with the score on 100 for two in 11.2 overs, while Pollard pulled off a wonderful catch, diving forward at long-off off to dismiss Andre McCarthy off the bowling of  Mitchell McClenaghan for 20 to reduce the Tallawahs to 163 for four after after 14 overs.

Phillips hammered six sixes and two fours in his topscore of 58.

McClenagham, Pollard, McCoy and Kavem Hodge ended with a wicket each.

Earlier, St Lucia Stars, battting first after winning the toss recovered from the loss of an early wicket, to post 175, well above the 158 average first-innings  CPL score on the ground.

Fletcher had to bat sensible after St Lucia Stars lost David Warner for seven runs in the second over with the score on 12.

Fletcher and Lendl Simmons quickly repaired the early damage with a 54-run partnership for the second wicket. The 50-run partnership between the pair came off 35 balls in 26 minutes.

Russell ended the partnership when he had Simmons caught in the covers by Johnson Charles for 22 with the score reading 66 for two.  Simmons faced 16 balls and hit two sixes and a four.

After the dismissal of Simmons, St Lucia Stars lost two quick wickets, both falling to Australian leg spinner Adam Zampa in the space of two deliveries.  Firstly, Fletcher went seven short of a half century when Zampa had him caught at long-off by Russell as St Lucia Stars dipped to 88 for three after 10.4 overs and secondly, Zampa bowled Mark Chapman for a duck with the last ball of the 10th over as the visitor slumped to 89 for four.

Fletcher faced 33 balls and hit five fours and two sixes in his knock of 43.

Zampa and Oshane Thomas were the best bowlers for Jamaica Tallawahs with three wickets each. Zampa had three for 24 from his four allotted overs, while Thomas picked up three for 39 from his four overs.

Russell finished with two for 48 from four, while Krishmar Santokie ended with one for 36 from four.