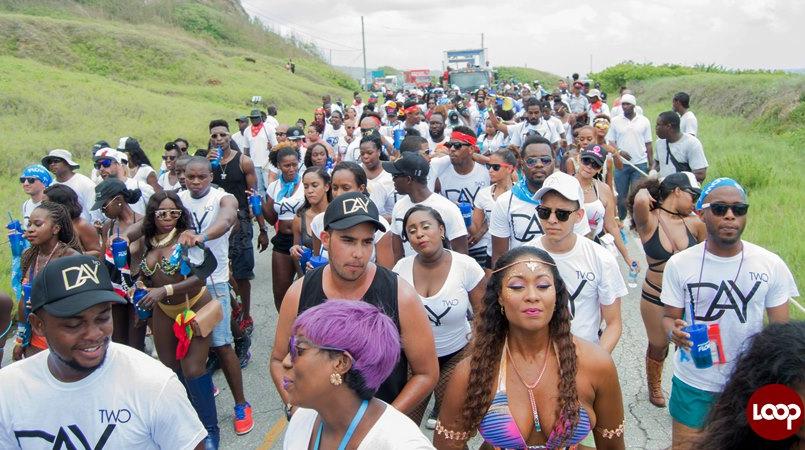 It was indeed a celebration on August 2 when DM Celebrations hosted Day Two, a second jump-up day for those who had a bit of gas left in the tank after Grand Kadooment.

The jump began at 10:30 a.m. with around 200 people moving off from the start of the 5 km East Coast route. The numbers eventually swelled to some 350 revellers in both T-shirt and costumes as the band moved along the Ermy Bourne Highway, ending with an after-party at one of the island’s picturesque beach houses.

Coordinator Ryan Moseley noted that the number was smaller than the hoped-for 1,000 revellers but he was still pleased with the turnout. He acknowledged some logistical challenges and assured that the team would take them into consideration and be better ready for next year.

“I’m happy for those that are here……Yes, I wanted more but at the end of the day this for me is not an event – this is a movement – and we really want Barbadians to get [that] into their heads and accept that we can do this,” he told Loop News.

Moseley also took the time to address concerns that the public was barred from watching the spectacle.

Loop News observed some picnickers in Barclays Park and that access to the route was possible before the jump started, with the road re-opening as the revellers passed.

Both locals and tourists were a part of the inaugural event and were kept moving to the sounds of the best of Crop Over 2016 and overseas soca, played by local and international DJs.

Lauren Francis from Grenada was one such individual who made the journey to be part of the celebration on the road and she described it as fantastic.

“I think it’s a little hotter than yesterday (Kadooment Day) but I am having a blast. It really is fantastic; I’m not ready to go home yet.”

Several other patrons who jumped also had rave reviews of their first-year experience with Day Two.