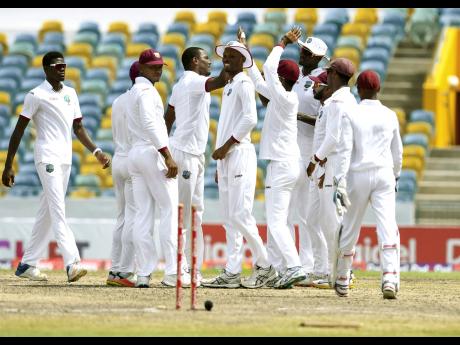 West Indies enter the decisive third Test against Pakistan at Windsor Park today chasing the “perfect cricket game”, as they seek to notch their first series win over a higher-ranked side in five years and turn the corner on a worrying trend of results.

A series, which started in disappoint-ment with a seven-wicket defeat at Sabina Park last month, suddenly took a turn for the better last week when the Windies produced a memorable performance to crush Pakistan by 106 runs at Kensington Oval and level the three-match series.

And with the hosts on the verge of ending a protracted drought, captain Jason Holder told reporters that rather than feeling pressure, it was critical his side pulled all the various facets of their game together to execute over the next five days.

“There’s no pressure. We’re in a situation where we’ve played some good cricket in this series so far,” a calm Holder said on the eve of the contest.

“We haven’t been perfect, but we’re striving to play a perfect cricket game. Once we strive to do that and we get 99 per cent of that going right, I think we will be on the better side at the end of this game.”

He added: “It always gives you confidence to win any cricket game. As I said before, there are still a few areas I would like to see them tighten up in. One is, for sure, our fielding, and I urge the guys to play a perfect cricket game, and there’s no better chance to do than in this final game.”

West Indies were almost unrecognisable in the last Test in Barbados. On every occasion they found themselves in trouble, they fought back gallantly, before producing the ultimate bowling performance on the final day to dismiss Pakistan for a record-equalling venue-low 81.

But even with the memories of the victory still fresh, Holder urged his side not to dwell on the win, but rather, focus on turning out an improved performance.

“It doesn’t change anything for me [that this game is a series-decider]. I just take it as another cricket game,” Holder noted.

West Indies’ last series victory over a higher-ranked side was when they beat New Zealand 2-0 in the Caribbean in 2012. Opener Kieran Powell is the only surviving member from that side.

Since then, West Indies have lived in virtual drought, with just nine wins in 36 Tests since then, and six of those coming in series against Bangladesh and Zimbabwe.

Of the 13 series played since, the Caribbean side has lost nine.

West Indies have retained the same 13-man squad from the last Test for the encounter here.