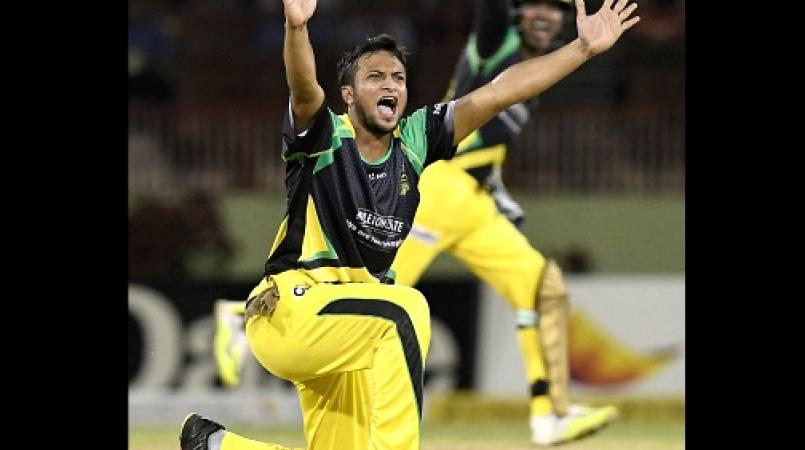 A remarkable match at Sabina Park saw the Jamaica Tallawahs recover from the loss of four wickets in seven balls at the start of their innings to defeat the Guyana Amazon Warriors in the Hero Caribbean Premier League (CPL). The Amazon Warriors batted first and set a sub-par total that should have been simple for the Tallawahs powerful batting line up to chase down. In the end runs from Chris Gayle and Shakib al Hasan saw them home with 25 balls to spare but they didn’t do it the easy way.

Four wickets fell for just two runs as the Tallawahs chase got off to an almost unimaginably poor start. Gayle was not allowed to open the batting due to leaving the field with a back injury. He had to wait to bat as he watched helplessly as his top order collapsed. Gayle needed to sit out 18 minutes of the Tallawahs innings, few would have expected them to be this eventful.

Perhaps the Tallawahs could have looked to defend when confronted with such a terrible start, but Andre Russell took the attack to the Amazon Warriors on his way to 24 (15). He departed to a superb catch from Adam Zampa at square leg and finally Gayle walked to the crease with the score at 45-5.

Gayle did not let up once he arrived as he decided that all-out attack was the best way to go about chasing this small total. His first two scoring shots were massive Hero Maximums. Gayle made his way to 45* as he put on a 87 run stand with Shakib that saw his team home. Once the back of the chase was broken the Tallawahs reined in the more attacking shots, but they got home with ease.

Having spent the last four matches playing on the slow, low pitches in Guyana the Amazon Warriors were confronted with a Sabina Park pitch that offered excellent pace and carry when they batted first. Andre Russell returned to the Tallawahs side and in his first bowl of Hero CPL 2016 he had the Amazon Warriors batsmen hopping around from ball one.

It was Dale Steyn that got the first breakthrough. Martin Guptill was playing his last innings for the Amazon Warriors – he is leaving for Zimbabwe with New Zealand. He couldn’t managed to sign off in style as a brilliant away swinger from Steyn caught his outside edge to dismiss him for a seven-ball duck.

Chris Lynn continued his fine form as he raced to 33 from 18 balls, but he could not go on, toe-ending a full toss from Imad Wasim to Russell at long on. With Lynn and Guptill gone it fell to Anthony Bramble and Jason Mohammed to set a competitive total. Both men really struggled to get the Tallawahs’ spinners away, especially Imad Wasim, as the Amazon Warriors went 40 balls without a boundary in the middle of their innings.

Mohammed managed to stick around to anchor the innings, despite being dropped off Steyn on 35, and he found some acceleration towards the back end of the innings as he finished on 46* (51). It was a career best score, the third time this tournament that he has made a new high score in T20 cricket, but it wasn’t enough to set up a total his team could defend.